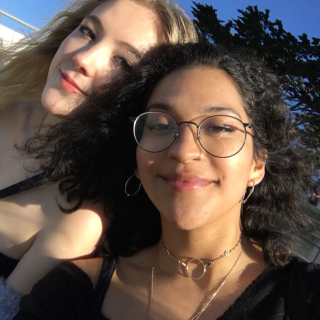 This website is an outlet for me and a great place to keep my art. Please enjoy and comment on my posts to let me know whether you hate it or like it. I like feedback.

3 of my friends and I  got together in L.A to go to a music Festival called Camp Flog Gnaw at the Dodgers Stadium . 2 of them came from Reno and 1 of my friends came from Paris. The squad was back together and nothing could go wrong…. we were in LA about to see our favorite artists and we had a lot of vodka….( I mean WHAT COULD  GO WRONG?!)

The first day of the Festival was so much fun and we got to see all the artists that we wanted to.

The second day was a completely different feeling because we were tired from the day before and it was harder to function. All we ate was 2 mini pancakes each and we were probably very dehydrated 😉

One of my friends wanted to leave a set to see Post Malone and I was all for it so I told my other friends that we would meet back with them later at the ZIPPER (which was a ride that became our meeting spot.)  So I take this mans (my friend) by the hand to go see Post Malone… and that’s when I noticed he had one too many and it went from holding hands to carry his body weight. He would run away from me and I would have to chase him and once we got to Post Malone’s stage, my friend was on all fours twerking his little tush on the dirty floor. I saw that people were staring at him so I took out my camera and started to take pictures of him so people would think he was just posing for the camera.

I think he got a little too excited so he started twerking harder and the next thing I know he face-plants into the cement and he gets up with part of his tooth in his nose. THIS MANS CHIPPED HIS FRONT TOOTH

and not just a little chip….like half of his tooth was gone hahahahahaha.

He starts laughing and that’s when I flip a switch in my head and turn into a momma bear and my friend becomes my baby cub. I’m like “oh fuck” we need to go back and meet with our friends because I knew it was all gonna go downhill from there.

So I’m dragging his ass to the ZIPPER and I’m criss-cross applesauce on the floor in front of it and my friend was sprawled out with one arm behind his back and his leg twisted in the opposite direction .. HE LOOKED DEAD.

People start to approach me and ask if he’s okay and I’m like “HES FINE. HES JUST NAPPING” and some girl was like

“I’m not leaving until he gives me a thumbs up”

and I said to my friend “hey! can you give me a thumbs up?”

and he slowly raised his thumb and the girl went on her merry way. (it was annoying at the time but I appreciate her)

…he throws up on me…

This guy saw what had happened and so he was trying to help me lift him off the ground and take him to the medical tent. Poor guy that was helping me; gets throw up all over his arms and all of sudden my friend springs up twerks and dances on the guy. I’m laughing my ass off and the guy was getting so frustrated because; the more he twerked on him; the more throw up got all over him.

My friend told me he didn’t want to go to the medical tent, so after waiting 30 min for my other friends at the zipper I figured they weren’t coming, so I took my friend and we headed for the stage they were at before.

We get to the other stage and my friend is laying on my feet while I’m crying and trying to call my other friends.

Once they answer I’m like “Please. find me.”  and I just hear them singing along to Kanye and saying “what?” 10 times. I told them where I was, and I could see them from a distance, but whenever another song would come on, I could see them run back to the stage hahahahaah.

(the story hasn’t even begun.)

In the corner of my eye, I see 2 paramedics and lowkey I was happy about it, even though I knew my friend didn’t want to go with them…

But when he saw them, he gets up and starts running.

He runs straight into a churro cart and falls on the ground and throws up.

The paramedics are trying to get him up but he karate chops the air and makes it clear he ain’t going nowhere without a fight. He starts twerking on the paramedics, and finds something to hold onto as he drops it low, and all of us were giggling and concerned at the same time.

The paramedics can’t grab him so they call the cops to grab him, and once he heard that the cops were coming he ran into the crowd of thousands and we couldn’t keep up with him, so he was GOONEE.

We searched the entire Kanye and Kid Cudi crowd for him and looked for him until the entire festival was over. We decide to go to paramedic tent, and gave them a vague description of what our friend looked like and they were like

“oh is he the one running away from the cops”

we were like damn I guess that’s good we know where he’s at….. but now we got a whole ass mission to get him. The plan was that my other friend and I were gonna go back home to sleep and my other friend was going to go get him.

At 3am as my friend and I are dead asleep, my other friend that was supposed to get him; is freaking out because apparently, he wasn’t at the hospital.

(I forgot to mention that he was without a wallet because he lost it the first day and without a phone, because we were holding it for him and without a tooth.)

We had to ask the hospital for a John Doe because he had no identification on him!

So we’re all up at 3am calling every hospital and police station for a John Doe and we get nothing. What more could we do? so I suggested we try calling in the morning. We had to find this mans in the morning because I was going back home that day and my other two friends had flights to go back home too. So we had till 4pm to find him.

It became the time where I had to drive back home and we still hadn’t found him. We are all thinking the worst because it was cold, he had no money or phone and he was walking around with a chipped tooth. We thought he was dead.

One of my friends ended up staying in LA to continue to find him. The last pictures I had of him were of him smiling with crazy eyes and a chipped tooth with part of it in his nose and a couple of him before we went to the festival that day.  We made a post on twitter of the picture of him with the chipped tooth and I reached out to LA news outlets and sent them the last picture we had of him and people honestly thought it was a joke because the picture was sooo ridiculous.

Its 9 pm the next day and it’s 20 hours since we last seen him. I’m freaking out and I can’t sleep and then my friend calls me saying HE CALLED FROM A BUS STOP.

apparently, he was at the hospital and then jail.

Crazy how one moment I was having the worst day of my life and then now I look back at it laugh.

This site uses Akismet to reduce spam. Learn how your comment data is processed.

This website is an outlet for me and a great place to keep my art. Please enjoy and comment on my posts to let me know whether you hate it or like it. I like feedback. View all posts by felizhuman